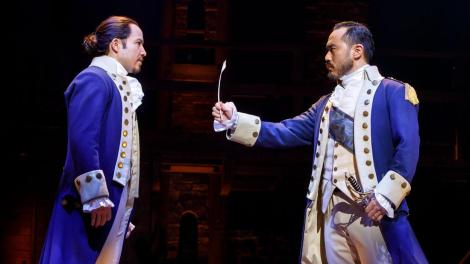 In the production of Lin-Manuel Miranda’s Hamilton that’s currently touring the country, George Washington is Korean and Alexander Hamilton is half Japanese. There weren’t many Asians in America during the time the play is set, but they are front and center in the hit musical, the cast of which is made up of actors from a variety of ethnic backgrounds.

“I think playing Washington [in Hamilton] for anyone is a big deal,” says Korean-American actor Marcus Choi, who plays the part in the Philip cast of the US tour of the production, and has been performing and acting professionally for 22 years.

“It’s such a great role filled with intensity and integrity,” Choi tells me. “I think the bigger deal is the fact that in such a successful show, the Hamilton creative team has taken another step forward and non-traditionally cast an already non-traditional show.”

When it comes to a lack of diversity in Hollywood, Asian-Americans are among the least represented. In 2015, only 3.9 percent of speaking or named characters in the top 100 grossing movies of the year were Asian, according to University of Southern California’s Media, Diversity, & Social Change Initiative.

There’s definitely been progress made since the days of Mickey Rooney’s infamous yellowface portrayal of Mr. Yunioshi in Breakfast at Tiffany’s. Lucy Liu, Ken Watanabe, Margaret Cho, and Russell Wong are all huge names. There are also up-and-coming actors like Mindy Kaling, Steven Yeun, Kelly Marie Tran, Benedict Wong, Constance Wu, and Randall Park, whose work run the gamut of comedy to sitcoms to dramas.

But with all this talent, where are the leading roles?

Mizota has been acting for more than 20 years. One of her most notable roles is Fook Mi, which she took in spite of the stereotypical nature of the character, because of the size of the movie, and because it meant she would get to work with Mike Myers and Michael Caine. Lately, she says, she plays a lot of newscasters, and comes across a lot of undesirable roles.

“I don’t like auditioning for parts where the person’s ethnicity is first and their humanity is second, [such as] objectifying parts or anything I find offensive” explains Mizota. “I’m seeing more roles open to casting ethnicities other than caucasian, but the majority of leads and stories told tend to favor white, male protagonists, with minorities in ancillary parts.”

Choi thinks there are two sides to that coin.

He says it’s important for genuine narratives involving Asians to be up front and center.

“I know that the commercial exposure to the Asian experience is broadening with shows like Fresh Off the Boat and Kim’s Convenience in Canada,” Choi explains, “but I also know that there is a long road ahead of us due to the fact that we are [among] the most underrepresented ethnic group in entertainment.”

Aaron Takahashi is the commercial guy. From Wendy’s to Kmart to Jiffy Lube, Takahashi has been in them all. His lovable, comedic demeanor allows him to mold into a lot of characters. He’s also been in movies like Yes Man and The Wedding Ringer, and popular television shows like Mr. Robot and New Girl.

“I can’t say that I’ve been stereotyped because I refuse to go out for any roles that portray Asian-Americans as stereotypes,” Takahashi says. “When I was doing sketch comedy, one of the writers in our cast told me [she wrote a role for me]. The character was a waiter who spoke in a Chinese accent. We are no longer friends.”

Takahashi says he won’t audition for any roles in which the writers or casting directors request an accent or pigeonhole him.

“Fuck that,” he says. “People who speak English with an accent aren’t funny. Besides, that just means that the writing is weak. Any project where the punchline of a joke is Asian people or Asian food or Asian culture disgusts me.”

It’s not a lack of actors that’s the problem. Takahashi says it boils down to studios and networks. It comes down to power and a need for those on top to be more inclusive.

“The Academy of Motion Picture Arts and Sciences needs diversity. The PGA, DGA, and WGA need diversity. We need more programs that encourage and foster the talents of aspiring Asian-American actors, writers, producers, and directors,” he explains.

Aside from stereotypes and a lack of viable roles, Hollywood is notorious for whitewashing from the inception of film to modern day, especially when it comes to Asian narratives.

“I think more and more we are finding that whitewashing doesn’t work anymore,” says Choi. “The Great Wall, Ghost in the Shell, and Aloha starring Emma Stone are all examples of whitewashing gone bad. I’m proud of the Asian-American community for finally speaking up when we are misrepresented.”

Mizota says It’s taken time, but she’s carved out a niche for herself through hosting, commercials, and working as a producer. She finds that system much more creatively fulfilling, and gets to bring herself to the project as a talent; it transcends being typecast for her race.

“[However], playing “Ethnic Mom #2” still pays my bills and gives my family health insurance,” Mizota says. “It’s an imperfect business, but there’s room for us.”

She remains hopeful for change on a grander scale.

“I look forward to a time when we can be considered leading men and women, and not just the ‘ethnic friend,’” she says.

“In some ways, I like to think that I am the face of the progress being made by Asian-American actors,” he tells me. “Most of the commercial roles that I book are not written specifically for an Asian actor. I book those roles because I’m the best actor for the job and I’m funny as hell.”

And if all else fails, Choi recommends the DIY method, and utilizing technology in one’s favor.

“I know how frustrating it can be to wait for someone to write the perfect role for you or for that audition to come by with that perfect part,” he says. “With the explosion of YouTube and social media, I think it is more of a reality now for any artist to write, create, and produce their own content and make it happen for yourself.”

Originally written for VICE: CLICK HERE FOR THE STORY.