Leggy is a dreamy surf rock/lush punk trio from Cincinnati, Ohio, all about friendship, chill vibes and inclusive ‘posi’ rock ‘n’ roll with a little party sprinkled in. They are currently on tour in the UK with legendary all-female Japanese pop punk group Shonen Knife, whose 90s alt prowess is in the same ranks as Nirvana, The Ramones and Sonic Youth. Leggy is on the rise too, having been featured in publications such as Noisey and Stereogum, and quickly gaining a fan base far beyond its home circles. We spoke with the members while they are on tour:

ACRO: Who are the members? Fun fact about each?

Leggy: Veronique on guitar/vox, Kerstin on bass and Chris on drums. Kerstin frequently has nightmares about her beloved dog being taken away, Chris has trouble sleeping in general and Veronique crashed our rental car three days into our recent UK/Ireland tour. All three of us suffer from generalized anxiety! 😀

What are your musical influences?

Vero: Mostly a mixture of garage rock revival stuff — The Vines, The Libertines, The Strokes — in conjunction with contemporary pop goddesses like Kesha & Lana Del Rey. I also worship at the altar of my queen, St. Vincent.

Kerstin: I’ve always been inspired by Stephin Merritt and his ability to write music of varying styles and genres. I think I’ll always be influenced by the bands I admired in my adolescence — Smashing Pumpkins, Broken Social Scene, Slint, Desaparecidos.

Chris: My lifelong (omitting early influences which were basically classic rock — so like counting age 13 to present, like what Kerstin said) influences are like Sonic Youth, The Replacements, Pavement, Archers of Loaf, The Frumpies, My Dad Is Dead, Slowdive and like the “women of reggae” Trojan comps.

The songs are very girl power bubblegum lush punk, yeah? Can you give some examples of how the lyrics are relatable and empowering to women?

Our jam “Grrrls Like Us” is the most obvious example of a “girl power” song of ours, though we try to make it relatable to any crew of besties, gender aside. It’s basically a song about reminding your bff that she/he/they don’t need a partner (especially one who doesn’t appreciate them!) and being there for them in during rough times — “the future is shining like a jar of fucking fireflies” — so don’t dwell on people / situations bringin’ ya down! 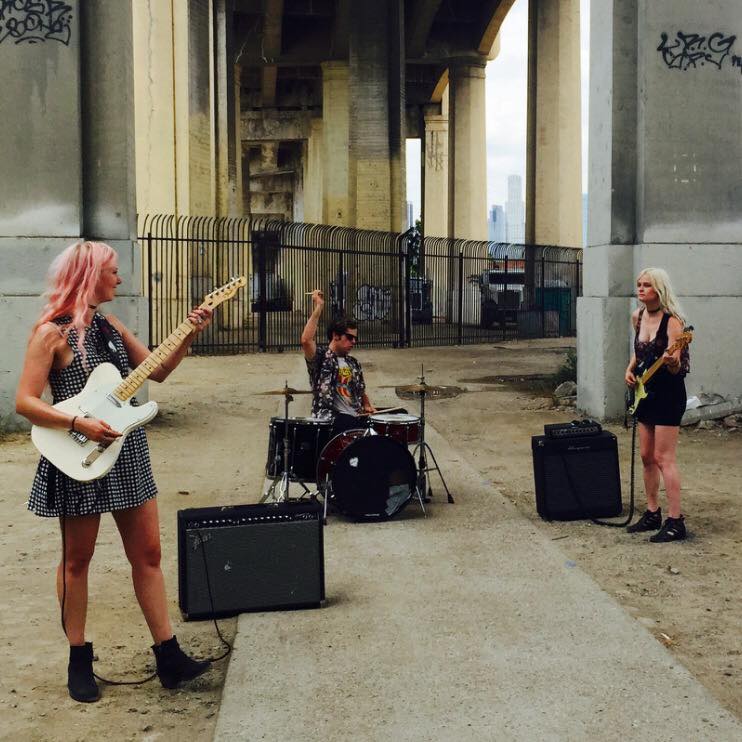 What is it like touring with the legendary Shonen Knife in the UK?

It’s incredible! We’re really truly so grateful to have had to opportunity to hit the road with our heroes for a whole month. It’s been wonderful to see them night after night, to get to know them and to share the stage with them. They have such a dedicated and friendly fan base and shows have been really fun. It’s just been an honor to be a part of it. Thirty five years and they still shred it every night! They’re all beautiful humans and again we just can’t express how grateful we are.

What was the best part of the tour?

It’s a little redundant, but playing with Shonen Knife each night has been dream world whirlwind rock n’ roll adventure. Besides that, having the chance to visit a lot of new cities, meet a lot of new people, play with some mind-blowingly sick bands and try a lot of new food has been our favorite part. Big shout out to our new homies and label buds Bruja (check ’em out!), Damnably’s George and Janice, Shonen Knife’s tour manager Gareth and to all of the bomb AF take away spots that have supplied Chris with his daily Curry Cheese Chips fix.

How does that compare to touring in the US?

Drives are much shorter, snacks are much better, a lot of the venues make food for the bands which is way cool, the architecture and general feel of a lot of the cities have been way different but in the best way. It’s been really cool and interesting to be able to cross back and forth through an area essentially the size of a few U.S. states but encounter so many different cultures, communities and accents. It’s been mind-blowing to play a show, get a feel for the city and people and accent and history, and then get on the motorway for just a couple hours and be in what is almost an entirely different world.

Leggy is an integral part of Cincinnati’s ‘music scene.’ How has it been developing a strong local fan base and playing so many shows back at home?

Every band in a music community is integral and equally important! Otherwise the scene or community wouldn’t exist. We’re just another band playing music, but we’re so stoked we get to do it in Cincinnati. We love our city and the people and bands and bars and D.I.Y. spots and everything else (especially the chili). Playing shows in town is sick and we plan on keep doing it as much as we can whenever we can. It’s really discouraging to read interviews or whatever with local bands who don’t seem stoked on our city. If you want to live somewhere else then live somewhere else, but nothing will get better unless all the bands in Cincinnati keep repping it and working hard and having fun. Luckily the community is growing and growing, and it’s already getting better and better! Not that it was bad before of course. There are just so many amazing bands that we’re honored to share the same town with.

What’s next for Leggy?

photo cred for the first pic of us standing: Tawni Bannister