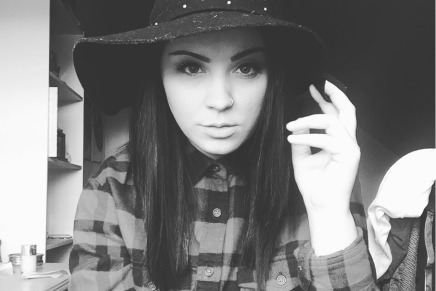 According to Broadly’s article, “The Women Making a Living in the Death Industry,” there are a rising number of women in their 20s and 30s choosing death as their profession. In the US, 43 percent of funeral directors and 57 percent of mortuary science students are women.

“Before the Victorian era in the UK and the Civil War in the US — periods when the funeral industry became industrialized and commercialized — women were the caretakers of the dead. While they were not typically involved in the burial itself, they prepared the body — laying it out, dressing it and washing it. This was seen as an extension of the caring work they did for the household in general, looking after children, the elderly and the sick. Once this private care was moved into the public domain, women were largely pushed aside in favor of men who had gone to mortuary school.”

“When I was a little kid, I didn’t think I was going to grow up to be a mortician,” says 23-year-old Jess Duval.

It’s something she now not only embraces but is extremely proud of. Her Facebook profile has a short bio: “I study the dead and ignore the living” with a skull face emoji. People sometimes peg her as “looking the part” with her long dark hair, pale skin and mostly black wardrobe — but the profession is not about looking like Morticia Addams. DuVal says first and foremost, it’s a way to deeply care for people.

“People take care of sick patients but it doesn’t stop when the heart stops. Just because they’re not alive anymore doesn’t mean that’s it,” she says. “There’s so much more that comes with death and people get really rattled with grief and they don’t know how to handle it. That’s where I want to step in — to make the process as smooth and compassionate as possible.”

While not quite a mortician yet, DuVal is in school to become one. She’s studying mortuary science at the University of Cincinnati Blue Ash and will be applying to the prestigious College of Mortuary Science (one of the most well-known mortuary schools in the country) this fall. She’s formed an inaugural mortuary club at UC in the meantime to unite those who are as passionate about the death industry as she is, and who want to dabble in it after class.

Beyond that, DuVal has already had a lot of hands-on experience working with the dead. She’s been out in the field, shadowing actual morticians; she’s helped pick up deceased bodies from homes to bring to funeral homes, embalmed the bodies and applied reconstructive makeup to them. She also has experience from her current job at Jewish Hospital Mercy Health, where she works as a unit clerk. That’s someone who runs the nurses station, watches the telemetry monitors and sits with patients who need one-on-one care. She recently experienced a powerful moment on the job: she watched a patient pass away.

ACRO: What was that experience like and how does that apply to what you want to do for a living?

DuVal: I’m in a hospital with a patient who’s dying of sepsis and his face is swollen, his breathing is rattled, his daughter is in the room saying her final goodbyes… I’m sitting in the corner, giving them their privacy and space. [Later, the daughter is] showing me pictures of this cute 90-year-old man from before he was sick. He did not look the same at all, compared to this dying man in a hospital bed. It was horrible, just how swollen from medications and edema he was. It was sad, but it made me realize how much I felt for this woman and [how much I] want to give back that last memory of him by recreating the pictures she showed me.

Is the funeral home industry challenging for young women like yourself?

When I toured the school, there were so many women there. It was still more men, though. It pissed me off when I heard a bunch of the guys say, “Yeah, this has been in my family for X amount of years. It was passed down from my grandfather to my dad to me and then my son.” I was like, “Why does it have to be a son?” I can do the same job. It’s just a business; men dominate the business world. That’s what it boils down to — running a business and, over the years, I guess people thought that men should take over the family business. This drives me to show that I can do this too. I’m capable and smart enough to do it.

Does it surprise people that you’re going into this profession?

If I’m not wearing black overalls and a crop top and my tattoos aren’t showing, I guess people might think I’m just a cute little girl who wouldn’t be interested [in something so] dark and weird. For me, it’s more of a passion to take care of people, just in a different way. But then when I’m wearing black overalls and a crop top, people are like, “Oh I can totally see you doing that.” And I’m like, “What does that mean?”

What drove you to want to pursue mortuary science?

The science is kind of what actually kickstarted everything. Watching the process and seeing what the body looks like — it being this pale, almost plastic-looking person with all of their blood rushed to the back, I’m just like, “Why does that happen? Why does the skin become that way? Why does our face sink in? Why do we change so much after death?” So the science is what really brought me in at first. And once you see the process, it’s seriously an art form. Everyone has a different art style, and I think that applies to the restorative art part of it. If someone is really pushing for an open casket… I saw how someone was a suicide victim and had a shot through their head. The [mortician] had to get creative to cover it up, blend it in with their face and then airbrush it to the skin color.

When you tell people what you are studying, how do they react?

People are either really fascinated with it or they’re almost offended. I work in a hospital and everyone assumes I’m in nursing school because I’m a young female. I tell them I’m actually in mortuary school and they give me this look like, “Um, my loved one is down the hall in a room and you’re talking about death? I don’t really want to talk about that.” So it’s either they don’t want to talk about it because they’re afraid of someone else dying or themselves dying or they have a shit ton of questions for me. Even if they are afraid of death, they always have questions.

How does constantly being around death affect you?

There are times when I’m seriously not bothered by it. I know what’s going to happen. It’s something everyone has to go through. There are other times where I question myself like, am I going to be able to handle this? I don’t want to die and I don’t want to see people I love dying. I’m always reminded of my parents or fiancée or my siblings. It’s almost enough to make me not want to do it. Almost. But I’d rather, with this passion I have, use it rather than not because of something that’s inevitably going to happen.

How do you plan on changing the game?

[A more modern funeral service] is one of the big things I want to bring to the table. I am not religious. My parents are both Christian and they would want a Christian funeral and I would give that to them because that’s what they want. I’m very fortunate through the school to be trained as a celebrant so I can give ceremonies to people who are nonreligious. I think that’s going to be really popular with our generation and even generations after us. It’s more like personal readings and more remembering the person instead of thinking about how they are going to be in heaven. That’s how I would want to do it — to be celebrated.