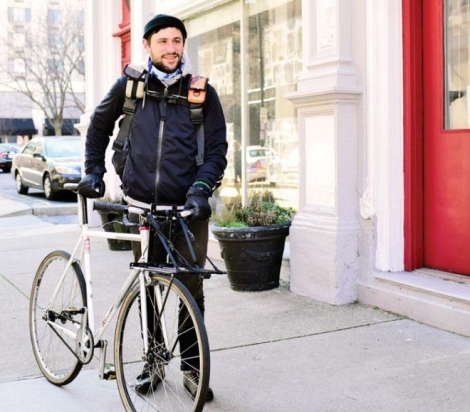 Not leaving bed is a pretty satisfying response to surviving a Cincinnati winter, but, like anything else, hibernating is even better when food is involved. Not all of us have someone kind enough to bring us breakfast (or dinner) in bed, but fortunately most of us have something called the Internet. Hop online and find local food delivery services like 53T Courier and national chains like OrderUp, which can bring the best of Cincinnati to your doorstep. All sorts of crave-worthy foods are now a click away — or an app or phone call away, depending on the service. Warning: These services are currently mostly aimed at those who live within the city center. For those who live too far out, there’s always pizza delivery.

Over-the-Rhine-based 53T Courier (pronounced “fifty three tee” for the number of teeth on a typical roadbike) puts a literal spin on the average delivery service by using bikes. They deliver most anything, but specialize in food. Founding partners Ian Bulling and Dave Adams started 53T Courier in June 2014 to make use of a lost culture they love.

“Our vision for a bicycle-powered food delivery and courier company were similar, though we each had distinct reasons for starting the company,” Bulling says. “Dave saw a need for more food delivery options as downtown and Over-the-Rhine continued to grow, whereas I saw an opportunity to bring back a culture that had been absent in Cincinnati for more than 10 years — that of the bike messenger.”

The team is comprised entirely of cyclists who — perhaps unlike you, food-delivery aficionado — enjoy being physically active and outdoors, rain or shine. They save time with their deliveries by ditching cars and avoiding city traffic while you’re lounging around your apartment awaiting a banh mi. “Bicycle is quicker and more efficient than cars in the area in which we operate,” Bulling says. “We’re able to get through traffic far more quickly, and there’s no need to find parking.”

53T Courier delivers from 12 local restaurants including Pho Lang Thang, Gomez Salsa, Cheapside Café and Park + Vine. Anywhere in “Zone 1,” which is the OTR and downtown area, comes with a $3 delivery fee. Outside locations like Queensgate, Clifton Heights and Camp Washington have a $4 fee. Clients can fill out an order request form if they want deliveries from other restaurants, but at an $11/hour rate.

“For food delivery, our guaranteed delivery time is 45 minutes, though outside of rush times it is typically closer to 20-25 minutes,” Bulling says.

They also deliver non-food items like retail, documents and packages, so you can really get the most out of your winter hibernation with these guys around.

Clients can use the website, call or use an app to place deliveries of all kinds.

Cincybite knows the value of convenience and has been helping people eat whatever the hell they want — and not just Chinese or pizza — from the comfort of their own homes since 2013.

Founder Robbie Sosna, who owned restaurants in L.A. and Cincinnati, says Cincybite differs from similar services because it is both a restaurant marketing and delivery service.

“We provide a local touch with an in-house call/dispatch center and local social media and marketing managers,” Sosna says. “We are also the oldest restaurant marketing and delivery service in existence.”

There are up to 29 options, including locals like Meatball Kitchen, Mr. Sushi and Cincy Steak & Lemonade, along with nationals like Crave and Buca di Beppo. That means you can have pasta, burgers, sushi, seafood, Italian and Mediterranean at the drop of a hat from locations as varied as Covington and Clifton to Blue Ash.

Cincybite partners with delivery drivers and dispatches orders on their behalf. The website states that, depending on location, you pay $4.99 to $6.99 per restaurant for orders placed online. There is an additional $2 charge for orders placed through the call center. Minimum delivery is $15, and the wait time is around 45 to 55 minutes.

WHERE: Cincybite has a variety of restaurants in different parts of town. Once you go online and enter your address and zip code, you’ll discover which restaurants deliver to you, along with an estimated wait time and cash minimum.

The delivery service with the most options is OrderUp, which features 66 restaurants in the Cincinnati area. It has been around since 2009, originating in Baltimore as a local service called LocalUp.

It rebranded as OrderUp three years later and has been successful on a national level, moving into the Cincinnati market last year. You can get Indian, sushi, breakfast foods, pub fare, Mexican and wings — really anything. Users create an online account and can only order through the website. Delivery times differ for each restaurant based on cooking times and whether a restaurant delivers its own food or if OrderUp has to go get it. OrderUp usually quotes 30-60 minutes, and you can track your order online for restaurants that use OrderUp delivery services.

WHEN: Restaurant order-ability is posted on the site based on hours — some do lunch, some don’t.

WHERE: OrderUp functions similarly to Cincybite: Enter your delivery address into a form and you’ll see which restaurants deliver to you.

Originally written for Cincinnati CityBeat: CLICK HERE FOR THE STORY.