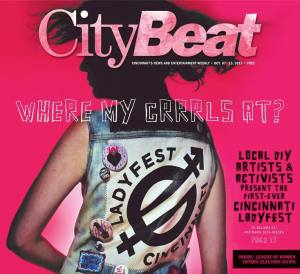 While she knows full well today, the first time Rachelle Caplan visited Cincinnati six years ago, she thought, “Where are my ladies at?” She would go to shows with her then-partner/now-husband who was in a well-established band with well-established friendships — most of which were male friendships — and feel out of place. She had just as much to say about music or anything else, but would get lackluster responses from those around her.

“The most shocking part wasn’t just the dudes’ reactions,” Caplan says, “but that beside them, in these typical heteronormative relationships, there would be girlfriends and women on their phones or standing there waiting patiently for this socialization of their males to finish. (They were) not interacting with each other and not even being receptive to it.”

Since then, Caplan knew something like Ladyfest, a three-day all-volunteer woman-centric music and arts festival taking place here Oct. 15-17, needed to exist. She had been quietly bringing the concept up to her female friends for years, just as an idea, but really garnered support in the past couple of years as women here started to infiltrate the DIY scene full-force.

“About two or three years ago, a tide started turning where women were interacting more and looking toward other women who have been here doing really awesome stuff for a long time,” Caplan says. “Now that it’s been brought up enough and people have thought about it enough, our society is at a point where we’re looking at gender and trying to understand one’s identity.”

Today, the local arts scene is brimming with women who are loud and proud and constantly collaborating. They’re all around the Queen City, behind mics, instruments, spoken words, written words, moving images and other creative outlets. There’s a Riot Grrrl-like resurgence of female Punk musicians like Sour Ground and Babe Rage, all-female poetry troupes like A Burning Bush and Bitch’s Brew and experimental feminist filmmakers like Liz Cambron and Megan Hague. A festival that celebrates this rampant girl power seems par for the course, if not overdue.

“All of a sudden I just looked around and I’m like, ‘My ladies are here. There are women who want to do this!’ ” says Caplan, who believes the culture of women standing around and scowling has long dissipated and been replaced with noncompetitive friendships. “The mentality now is: I’m going to look at them and form a connection and build something,” she says. “That little switch is massive.”

Caplan, who has lived in various cities including Chicago and along the East Coast before moving here, modeled Cincinnati’s Ladyfest after similar fests in other cities, some of which she helped organize. Through her experience with community organization and booking artists, she has managed to bring some high-profile acts to this fest — like Wussy — along with a bunch of local favorites, including Kate Wakefield and Fairmount Girls.

Caplan might be the head organizer of Ladyfest, but she notes that it is very much a group effort in the same vein as any DIY community organizing. She and other key coordinators such as Ava Roberts, Abiyah, Cortnie Owens, Ashley Bowman, Jen Warren and Colin Murray have been hashing out the details of the fest for seven months now. They’ve been coming together, brainstorming and making connections.

“Women who weren’t sitting in the same room having a dialogue all of a sudden were spending five hours (at a time) building something that was manifesting their passions,” Caplan says. “You have these women who are performing their music acts or are filmmakers, writers, readers … now they’re in a network because they’re all working on this project together.”

As far as music goes, the band Wussy is the biggest in terms of being a national and touring act, according to Caplan. They’re Cincinnati-based, but with national notoriety. She says there is also a spotlight on Fairmount Girls, another long-standing Cincinnati band. Caplan’s personal favorite is experimental Noise band Linear Downfall from Nashville, Tenn.

Thursday night of the fest is an avant-garde and boundary-pushing “noise night” that takes place entirely at the Ice Cream Factory in Brighton.

Artists for that night include Nebula Girl, who is a chemist and is making a full-scale performance specific to the fest with visual artscape; Luuli, who does alien-esque freeform performances; DROMEZ, who Caplan describes as epic in presentation and feel-inducing sensory escape; and Forced Into Femininity, which uses its dreamlike states and imagery to exorcise misogyny.

Friday and Saturday music performances will take place at various venues in Northside. Some of those acts include Brazilian Wax, Post Pink, SMUT, Black Planet and Swim Team.

One of the musicians, Kate Wakefield, is a CocoRosie-inspired self-proclaimed “opera singer who lost her mind.” She’s a local favorite who wreaks havoc with her majestic voice and electric cello. Performing on Saturday, she wrote a song that aims to empower women. It deals with a collection of violent acts against women that took place in Northside over the summer — multiple women were robbed at gunpoint on Hamilton Avenue, and one was raped and robbed. Wakefield says it’s important to have an outlet for considering difficult topics and for encouraging creativity in general.

“It is pretty easy in music to feel isolated from your male counterparts,” Wakefield says. “Sometimes you feel like because you’re a woman, people won’t think you rock as hard, or that you’re as dedicated or talented … or that you can’t carry your amps. Festivals like this one will blow those ideologies out of the water and pave the way for new ways of thinking.”

On Thursday and Friday, the fest goes from 7 p.m. until whenever bars close. Saturday, however, has workshops 4-7 p.m., with topics including musical education for children in the community, gender identity awareness and more.

Blogger Cortnie Owens is leading the Fat Politics workshop alongside Nicole Combs. Owens is excited to promote body positivity and to be surrounded by powerful women in an environment in which she won’t feel powerless. She says the festival has a Safer Space Policy, so anyone who acts rude and perpetuates ideas of patriarchal constructs will be booted out so no one has to be uncomfortable.

“(The workshop) focuses mainly on unlearning beauty standards that we have and empowering fat women to see their value,” Owens says. “A small portion of it would be me talking. We have an activity planned and some discussion. The activity will be centered on if you’re having a ‘bad body day’ and how to help that.”

There is a visual art exhibit every day of the fest, capped off with Remembering Queer Voices, a collaborative effort that brings to light obscured queer women in history, on Saturday.

One of the readers, Nepper, writes semi-autobiographical and fantasy poems in the confessional tradition with what she calls a “nervous, sweaty, awkward and sweet” performance style. She was asked to read by musician and artist Jen Warren, someone with whom Nepper had hoped to cross paths and considers a hero. Nepper similarly is thrilled to work with Caplan, who she also looks up to.

“When I first started reading in Cincinnati, I almost always read with a group of dudes in a room full of dudes,” Nepper says. “Luckily, I think that has changed in the past few years. I’m definitely excited to read with some folks that I’ve never read with before. I’ve been told that 95 percent of reading poetry is hanging out, so I’m really looking forward to hanging out.”

And in these three days of entertainment and education at Ladyfest, there is sure to be a lot of hanging out among performers and attendees. Organizer and musician Ava Roberts is most excited about drawing in a wide array of people, and not just those who are already within her circles. Caplan agrees and touts the importance of diversity with this upcoming Ladyfest, with many races and artistic styles represented, and all welcome.

As far as the music goes, these types of fests traditionally feature similar kinds of Riot Grrrl-esque music. Caplan wanted to go beyond that and do something that not all Ladyfests even do. She is looking forward to the Hip Hop night — something she considers pretty unique — on Saturday at an apartment above Schaeper’s Pharmacy in Northside, where organizer Colin Murray lives.

“It’s like a private party — super DIY and hella cool,” Caplan says. “It’s going to be really fun. Ladyfests are characteristically really Punk and Metal-dominated, which is awesome. That’s my thing, but when we started thinking about it, we’re like, ‘This is Cincinnati. That’s not all that’s happening here.’ To not have diversity would be to lie about what is really happening here and to devalue the real talent here.”

This diversity can also be seen with the different age groups and generations of women performers here. Caplan is in the feminist Art Punk band Babe Rage, which is a relatively new project. The group did a collaborative residency at The Comet last month, during which they played every Tuesday night with different artists.

“It was so amazing,” Caplan says. “Just the experience of sitting in the room with these great female artists. … Abiyah’s been doing this for over a decade. Kate Wakefield has a master’s degree. I’ve been playing for a year and a half and that’s OK. (I really appreciate) the empowerment and feeling of knowing that. I learned more in two hours hanging out with Abiyah and Kate Wakefield than in some of my college classes.”

She says that this is the goal of a vivid DIY scene. You go see shows and participate in events to have fun, but there are layers of development that simultaneously happen and are maintained without a lot of effort. Caplan undoubtedly wants to pass the torch to younger generations, just as she feels she has gained so much from female artists who have come before her.

One of the goals of Ladyfest Cincinnati 2015 is to start a youth program for children of all genders led by local female musicians. This will be a safe environment that introduces kids and teens to the world of music and art through collaboration. The hope is that such a program can reduce the fear of judgment, criticism and forces of the patriarchal norm when it comes to expression. Not only will this allow children to grow artistically, it will also allow youth to see women as leaders creating positive change.

Caplan says that they are modeling this youth program after similar programs, most notably Girls Rock Camp, which takes place in many cities across the U.S. She has worked with the organizers of Outskirts in Louisville, a similar women’s fest, to model some of Cincinnati’s potential youth program after theirs. Outskirts has an established full-music curriculum, something Caplan wants to pursue for Cincinnati.

Between working with diverse artists who have been in the arts scene for decades or just recently and create experimental documentaries or avant-garde music, Caplan describes it all as a fantastic experience and learning opportunity.

“There has already been discussion on the potential of having the fest be recurring, either annually or biannually, to give us time to actualize our goals,” she says. “If given enough support this year, I think it’s fair to say that you’ll be seeing more from Ladyfest Cincinnati in the future.”

She’s found her girls, and they’re here to stay.

Originally written for Cincinnati CityBeat: CLICK HERE FOR THE STORY.