I went to see Straight Outta Compton with my friend who’s a screenwriter; he mentioned beforehand how he had read a few scathing reviews about its sexism. I was excited about the film because it felt significant and timely. The Black Lives Matter movement is gaining traction in an unprecedented way and the recent murder of black Cincinnatian Samuel Dubose by a white officer, and the officer’s subsequent indictment, hit close to home. All of this is relevant when N.W.A.’s. “Fuck Tha Police” comes to mind. (N.W.A. stands for ‘Niggaz Wit Attitudes,’ and is the group portrayed in the film, featuring mostly Dr. Dre, Eazy-E and Ice Cube.) While I am aware of the weight of intersectionality in dealing with oppression, I wasn’t even thinking about the obvious misogyny in the group’s lyricism and members’ lives.

So when my friend brought this up, I immediately lost some interest in the movie. I didn’t want to support something that glorified sexism. But my friend dispelled that pretty quickly. As a screenwriter, he has to think about portrayals of reality every day. His current work examines the populations in Cincinnati’s Price Hill, an economically depressed and racially mixed neighborhood. The constant dilemma for him is being conscientious and respectful of demographics to which he doesn’t belong when he’s writing characters — but as a storyteller, he realizes drama thrives on conflict and human fallacy. It’s necessary to have characters who are flawed and, more importantly, real. The key is to stray from stereotypes but create moral complexity.

Straight Outta Compton is a biopic, not a work of complete fiction. So in that case, it’s even more crucial that it preserve the reality of the rise and fall of N.W.A.’s gangster rap legacy. The delineation of misogyny can be seen as a necessary evil rather than glorification. The movie would have been dishonest if the members of the group were shown to be respectful or ambivalent toward women; that just wouldn’t be accurate. But there is an inconsistency with the film’s choice of what type of misogyny to include. The problem isn’t the explicit pool party loaded with topless women or the hotel group sex scenes with the cruel play on “Bye Felicia” — that’s all supposed to be fun and enticing for the viewer. The problem is the expurgation of certain uncomfortable truths.

Since the film’s release, Dr. Dre’s abuse of women, most notably in relation to journalist Dee Barnes in 1991, has resurfaced in the media. He pleaded no contest to the charges back when it happened, but people are calling him out again and this led to his recent apology. Barnes wrote an article about the attack and noted that it was excluded from the film. While she wouldn’t have wanted to see that scene played out and believes it to be “too ugly for a general audience,” she states, “Like many of the women that knew and worked with N.W.A., I found myself a casualty of Straight Outta Compton’s revisionist history.”

So the film glossed over the violence toward women during the N.W.A.’s time in the limelight. In addition, more central women’s storylines were erased. It’s understandable that the emphasis rested on the relationships between the N.W.A. members, and the film succeeds at showing this through their tumultuous ups and downs. But there are some noticeable plot holes involving the women in their lives. For example, we don’t know what happens to Dre’s ex girlfriend and child after she confronts him in the car. Dre’s mother was so concerned about his wellbeing in the beginning, but we don’t see her reaction to his fame. We never find out if Eazy-E’s pregnant wife also has HIV, and she’s out of the picture once he is. It seems pointless, disconnected and even confusing for the film to introduce these narratives without resolution. This goes hand-in-hand with Barnes’ point about the revisionist history. 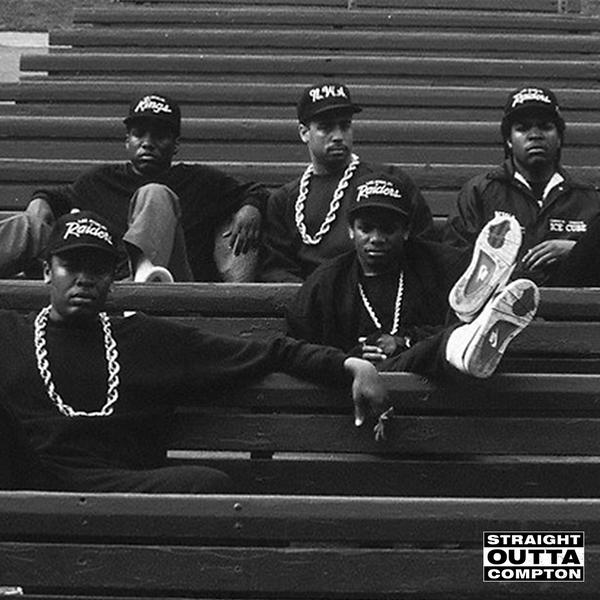 If the director and actual rappers behind the film didn’t want to sugarcoat what happened, they failed in some ways by not illuminating the whole truth. The scene with Dre’s attack on Barnes should’ve been kept in. The women should’ve been given more of a voice or at least complete narratives. That would’ve made the biopic one step closer to reality, and would further legitimize the flashy sex scenes and nude female bodies as integral to the plot. All of the dark and hard-to-watch truths involving women were just as much part of the story as the enticing party scenes. The objectification isn’t promoting misogyny (it’s just depicting it), but it comes across as borderline gratuitous when other more crucial parts of women’s stories are omitted. But because it’s a biopic and the stifled voices belong to real people, a lot of them have at least spoken out and have started dialogues about issues that affect women in gangster rap culture and beyond.