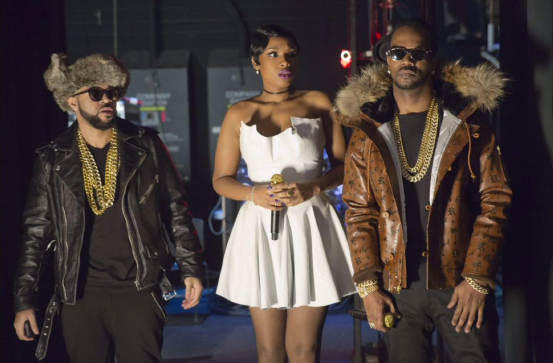 Just when we thought Hollywood couldn’t get any whiter, well… it did. Remember when Neil Patrick Harris announced that we were honoring Hollywood’s best and whitest — oops, brightest — at this year’s Oscars? Can’t forget that one. It may have been one of the more memorable moments in an otherwise snoozy media event.

The 2015 Academy Awards were so lacking in diversity that they got a special hashtag, #oscarssowhite, that trended all over the Internet long before the big night. It lived on during and after the event, sparking much-needed awareness and discussion.

While minorities were largely absent from those Oscars ballots, they have been making appearances all over network television this year. As we know, film has historically trailed behind TV on that front, but the contrast was notable.

When I watch the new ABC show, “Fresh Off the Boat,” it sometimes feels surreal. Am I really watching an entire Asian family similar to mine do their thing on mainstream television? It feels unnatural to see Caucasians as secondary characters who are often the butt of the joke or a trigger for social commentary.

While it shouldn’t feel strange, it does — because “Fresh Off the Boat” is the first show in twenty years to feature an Asian-American family. That means I was a toddler who mostly watched Sesame Street when the last one, “All-American Girl,” aired for one season. This is a breakthrough for network television, as miniscule as that may be.

2015 has proven to be a good year for diversity on TV with the release of other hit shows like “Empire,” “How to Get Away with Murder” and “Black-ish,” which all feature predominantly black casts, and “Jane the Virgin,” which features a predominantly Latino cast. Cue celebration!

So when an article like, “Pilots 2015: The Year Of Ethnic Castings—About Time Or Too Much Of Good Thing?” by Nellie Andreeva pops up, you wonder if it’s from The Onion. Or if it’s clickbait. When you realize it’s neither, you thank your professor for sharing the article with you and rant to him about how disturbed you feel.

Luckily, I wasn’t alone in having this reaction. Shonda Rhimes had my back, as one might expect. She basically shut the author down in fewer than 140 characters. Other celebs-who-matter followed suit. Then came the outpour of news articles and op-eds. “Diversity on TV Is Scary, Reports White Woman.” Yup. I always knew Jezebel delivered the best news.

With diversity in Hollywood being both a sensitive and extremely hot topic, this garnered a fair amount of attention. It sparked responses such as The 13 Most Ignorant Quotes From That Awful Deadline Article, Hollywood’s Still Racist: Why the Deadline ‘Ethnic Casting’ Piece Is Dangerous and a sass-filled and on-point response from the humor blog Awesomely Luvvie. They all make key arguments about how problematic this piece is.

For instance, the Deadline article states that with the shift toward more minority castings last season, “the pendulum might have swung a bit too far in the opposite direction.” Uh oh. God forbid there are select roles that white actors won’t be considered for amid the 70-80 percent of the representation they have on TV.

I’m pretty sure that having a few network shows that feature primarily blacks and Asians doesn’t mean that we’ve gone “too far.” Especially when ABC, the least heavily white of the major networks (including itself, CBS, Fox and NBC) only has 8.57 percent Latin, 7.86 percent African-American and 3.57 percent Asian representation. All of those races are underrepresented on the network when compared to the demography of the U.S.

And to suggest that it’s an issue that “Uncle Buck” and “Love Is A Four Letter Word” are among several projects where the original white protagonists have been changed to black this season?” That’s erasing the long, normalized history of white actors taking roles that should have been for minority actors (blackface, yellowface). We’re not going to see a grotesque caricature of whiteness akin to Mickey Rooney’s “Japanese” Mr. Yunioshi [from “Breakfast at Tiffany’s”] anytime soon.

Even more troubling are the openly racist remarks thrown into the article like, “Because of the sudden flood of roles for ethnic actors after years of suppressed opportunities for them, the talent pool of experienced minority performers — especially in the younger range — is pretty limited.” This insinuates that non-white actors aren’t as talented as white actors, an assumption that cannot be backed up because… it’s wrong.

While the backlash to the Deadline article has been loud, few have addressed how having more minorities on TV is not only deeply important for diversity’s sake, but is economically-savvy. Minorities are being cast for a reason. Hollywood is a business, and it’s cashing in on the U.S.’s shifting demographics — and that’s not a bad thing.

Simply put, there are more and more minorities in our country, and people want to see more minorities onscreen. They want an accurate representation of the world around them. They want to see people who look like them and watch experiences that may reflect their own. It keeps things interesting. That’s the point of entertainment.

For example, the Screen Actors Guild (now SAG-AFTRA) released a 2010 report, “From Dollars & Sense to Screen: The API Market and the Entertainment Industry.” This notes the tremendous spending power of Asian Pacific Islanders when it comes to film, television and new media.

“With one of the fastest growing population rates and some of the highest annual household incomes, APIs have become one of the most lucrative market segments in the world,” it states. So naturally, Hollywood is attempting to cater to that.

This doesn’t only apply to Asian-Americans. The Pew Research Center’s U.S. population projections show that minorities will become the majority in America, and sooner than we might expect — by 2050, according to a 2008 projection. For millennials, that will be within our lifetime.

UCLA’s Ralph Bunche Center’s 2015 Hollywood Diversity Report: “Flipping the Script” points out that Hollywood needs to add non-white characters to maintain the attention of moviegoers. It ultimately notes that “diversity sells.” We’ve all known this, but it’s now officially noted. This especially makes sense when, for example, Latinos are going to the movies far more than other U.S. ethnic groups relative to their population.

The same applies to TV. This could explain why our new shows are not just doing well, but thriving. Based on ABC predictions, “Black-ish,” “Fresh Off the Boat” and “How to Get Away with Murder” are all likely to be renewed for a second season. They have high ratings, which aligns with the Hollywood Reporter’s article, Diverse Casts Deliver Higher Ratings, Bigger Box Office.

This means that what’s happening isn’t some prickly affirmative action mandate. It’s supply and demand. Non-white actors are in demand, and rightfully so. Why wouldn’t they be, when TV watchers and moviegoers are a multitude of races? And even if this were somehow affirmative action casting, so what? That means white actors are missing out on a few meager roles here and there. Welcome to the entire history of non-white actors, multiplied by who knows what.

Finally, there was that unsettling remark in the Deadline article that reduces the popularity of shows featuring minorities to a trend. It questions whether the “the trend of ethnic casting” will come back with a vengeance next season.

As the Vulture article points out, Kylie Jenner’s lip liner is a trend. Furbies, gel pens and MySpace are trends. Race is not a trend. To suggest that it  is insulting. It undermines the importance of having TV and film that fairly represent the demography of the world we live in. It implies that Hollywood is rightfully a white industry, and that the surge of “ethnic shows” we see is a passing phenomenon.

It should and will be quite the opposite. 2015 represents a trailblazing year for TV that will likely spark future shows with leading minorities. With that little push and the rapidly changing racial landscape of the U.S., these shows are here to stay and will undoubtedly become the norm. In the meantime, they’re hardly enough of a good thing.