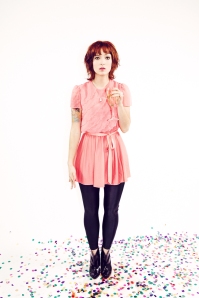 The lovely ladies behind-the-scenes of Hollywood often get the shaft when it comes to recognition by the general public.

Quick, think of a few female film directors, writers or producers. Who comes to mind? Oscar-winner Kathryn Bigelow? I think she was married to James Cameron at some point. Sophia Coppola? She’s the daughter of Francis Ford Coppola! Diablo Cody? Wasn’t she a stripper? Oh, and there’s that pink-haired woman, Jane Goldman.

While film enthusiasts, and especially fans of the indie circuit, might be able to recall many more female filmmakers, they often exist on the fringes of the industry. Renowned backstage ladies are few and far between, and are often distinguished by their relationships with influential males, their pasts or their physical appearances.

The University of Southern California’s Media, Diversity and Social Change Initiative conducted the largest, most inclusive longitudinal study of gender prevalence in recent film to date. Unsurprisingly, women are once again shown to be underrepresented in the media, both onscreen and especially behind the camera. In fact, the number of female directors and writers is at a six-year low.

The study assessed the gender of each director, writer and producer across the top 100 grossing films of 2013. Out of the 1,374 filmmakers sampled, it turns out less than a fifth (15.9%) were women, which results in a gender ratio of 5.3 male directors, writers and producers to every one female.

Diablo Cody, award-winning writer of “Juno,” is “grudgingly aware that being a female filmmaker means being responsible for the ambitions of all womankind,” as noted in an L.A. Weekly article about how she hates directing. She feels that being a female director means constantly having to prove yourself because if you screw up, it means all women fail at directing.

“The big issue is the fact that in 2013 there were only two female directors out of 107 directing the top 100 movies of that year,” says MDSCI Project Director Marc Choueiti. “People might have difficulty trying to think of female directors because we haven’t seen many female directors at the top box-office films in the last six years.”

According to MDSCI Research Scientist Katherine Pieper, there are many more women making strides in the independent film scene when compared to top-grossing films. While women are consistently right around 4 or 5 percent mark behind-the-scenes in popular films, they represented half the directors on the slate in the 2013 Sundance competition film. These films may not typically make it to the top box offices, but are well-received, gaining popularity and momentum.

Women also accounted for about 40 percent of independent documentary directors in six of the past 11 years. This may all seem like good news, but there is still work to be done; while women are doing better in indie films, they’re still not approaching the 50 percent mark in various genres.

Some of MDSCI’s work has focused on the barriers that female directors and producers face, the biggest one being what Pieper describes as a gender financial barrier. Most film financiers are males, and female filmmakers may not get as much funding because they are perceived as less confident, less trustworthy with resources and less able to competently lead a crew.

“In the independent world, the barriers might still be present, but lower in terms of lower budgets and smaller crews. As we move into more of a higher-stakes financial realm, we see fewer and fewer females,” explains Pieper. “And we even see that in Sundance, when they move from the competition space to the premiere film space — which has slightly higher budgets — and into top-grossing films.”

“We like to say, as the money moves in, females move out.”

It’s a problem simply because fewer females behind the camera means fewer females in front of it. MDSCI’s measure of balance is looking at every female who has spoken at least one word or is named within the context of the plot. On average, there are about 40 characters per film, but MDSCI discovered females make up less than a third of those characters across all 100 films. What the group has analyzed is the degree to which a female director or writer might alter the amount of females on screen, and Choueiti says they have found a relationship.

“When a female director is behind the camera, you will see more females on screen, which is good news,” he explains. “If we want to make a change in this arena — if we’d like to see more female representation on screen — putting a female director behind the camera or perhaps on the writing staff might make that happen, which is one good sign of affecting this cause.”

But even Choueiti notes that this is a correlation and not causation.

Studies also show that when women are not present behind-the-scenes of a movie, the female characters on-screen tend to be more sexualized. MDSCI found a connection, with two key indicators of sexualization (sexually revealing clothing or partial nudity) and women behind-the-scenes. The relationship indicates that films without a female writer have more sexualized portrayals of women than films with a female writer.

“We’ve been trying to eliminate this issue for a while now and hopefully people are catching on — maybe people who are making decisions about hiring practices in the film industry, but we haven’t seen change yet,” says Choueiti.

“We’re going to keep measuring and taking a look to see if these numbers increase, and hopefully by maybe 2016 or 2017, there might be some more female directors, writers and producers in the top 100 films or popular films in the U.S.”

MDSCI’s work shows that there are very real and persistent obstacles for female directors and producers behind the camera — and inevitably on-screen — but things may be looking up. Pieper says that there’s been quite a lot of advocacy and activism in this space that is hopefully going to reach the ears of decision-makers. A lot of that activism takes place through social media such as twitter, blogs or campus conversations, predominantly in the last five or six years.

“I think it’s always been there, but people now have more of a means to access and to amplify it. Our students have a real concern for these issues and care about them deeply,” Pieper says.

“I think it’s become [an issue] that people really identify with and do care about, and they want entertainment to reflect the world they live in and the lives they lead. By adding more women who are difficult, kind, interesting and multifaceted characters, we get closer to the reality of the world we live in.”

People want to see more women behind studio doors, and it’s easy to see why. Half of all ticket buyers for movies are female (surprise!). These women, myself included, want to see relatable, realistic heroines or even anti-heroines onscreen rather than sexualized, one-dimensional eye-candy. And let’s not forget that movies spotlighting strong female characters make bank (Jezebel knows what’s up).

For example, when looking at recent films, women and men alike appreciate movies akin to “The Hunger Games: Catching Fire” ($391 million) and “The Heat” ($160 million). And let’s not forget about “Frozen” ($248 million), because how in the world can you with its viral-like success and that song? It’s a movie that everyone loves to hate but secretly loves.

Though both “Hunger Games” and “The Heat” were directed by males, “Frozen” was co-directed by Chris Buck and Jennifer Lee. It’s refreshing to see a woman having a part in a massively successful movie, especially one about sisters/princesses.

“Speaking to any person who is a working actor, or above-the-line or below-the-line worker in Hollywood from underrepresented groups–they want to work more, absolutely! These people want jobs and if most of the jobs are going to one particular type of individual, some people aren’t getting a chance to either work, pay their bill or also tell great stories,” says Choueiti.

“There’s a range of stories in this world that’s unlimited in terms of what can be spoken to. If we keep seeing specific patterns portrayed over and over again that are slotting individuals from a specific gender, I think that everyone’s missing out in that sense.”

So seriously, Hollywood. Brace yourself for more Lena Dunhams, Sarah Polleys and Haifaa Al-Mansours because they are undoubtedly coming, and the world is happy about it.